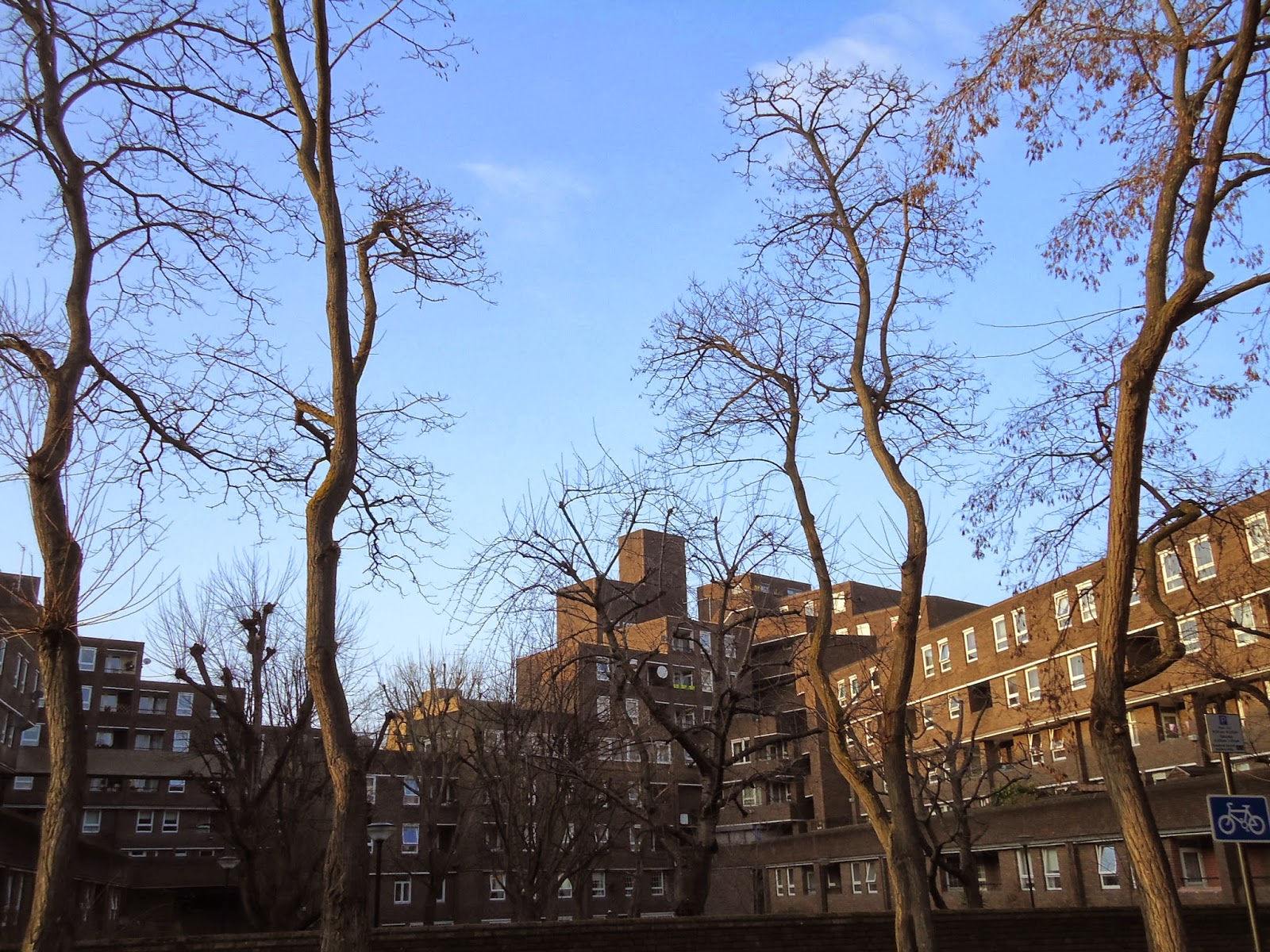 In the UK, an 'estate' in the countryside is considered very des res, whereas living on an estate in London would be a bit difficult. Built as social housing in the sixties, seventies and eighties, they had to pack in tenants, and had to be designed and built on a shoestring to strict rules. But there are some jewels. The Earlstoke Estate is one. The English are very good with their brickwork and this one is executed in a beautiful warm brown brick. 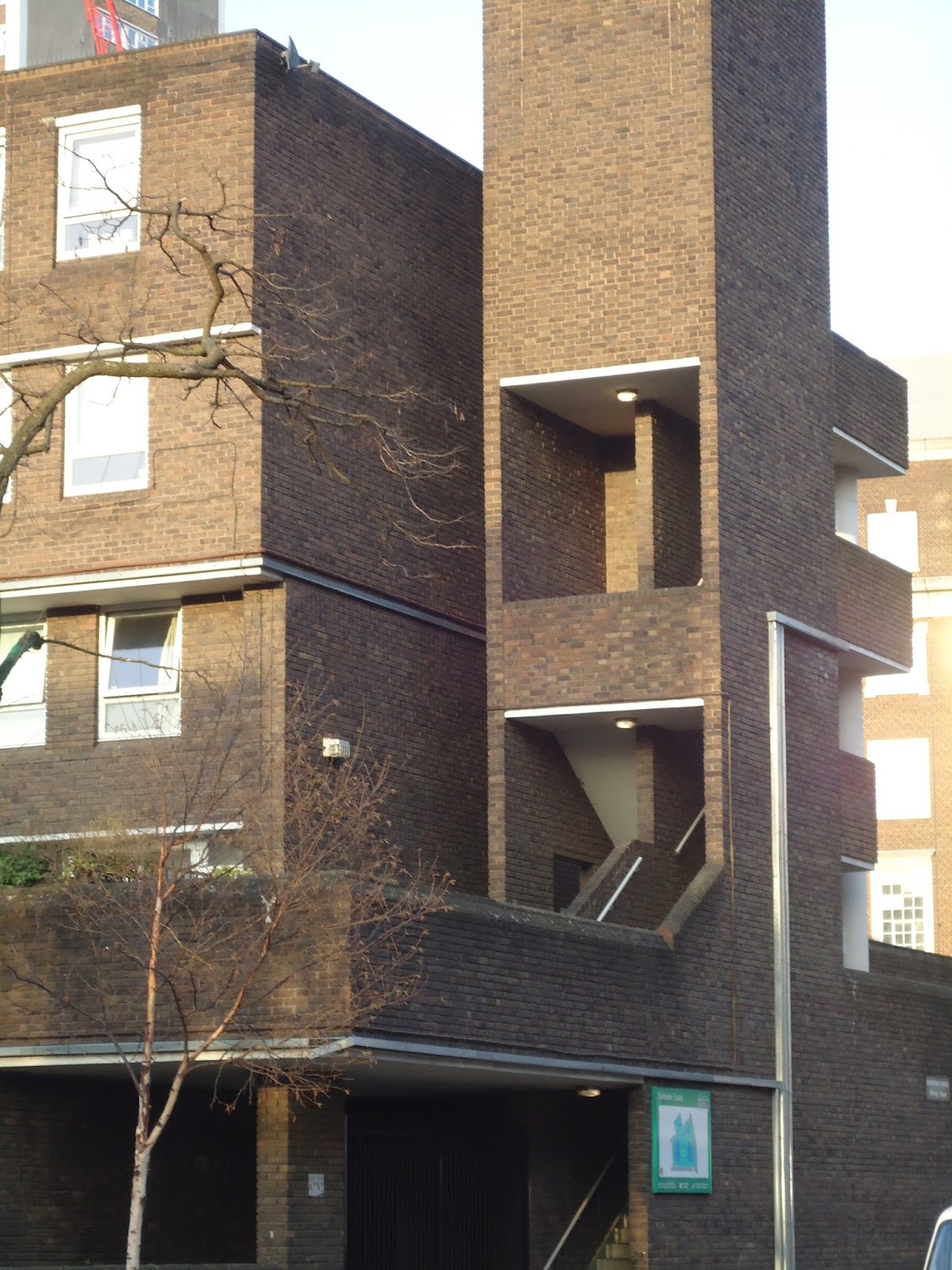 The Earlstoke Estate was built by the LCC between 1969 and 1976, and transferred to Islington Council in 1981. It was built like 'streets in the sky'. The distinctive free-standing stairwells link streets on different levels. The interesting design feature is that they do so partly at the front and partly at the back of the buildings. Note also that the different layers of the building are indenting, whereas the sides are aligned.

Masonry is an art in England, and you can see it here in the thin, elegant outside walls with openings of the stairwell. Also check out the very clever handrail built into the right wall, just taking the edge off the angular design. Clever. 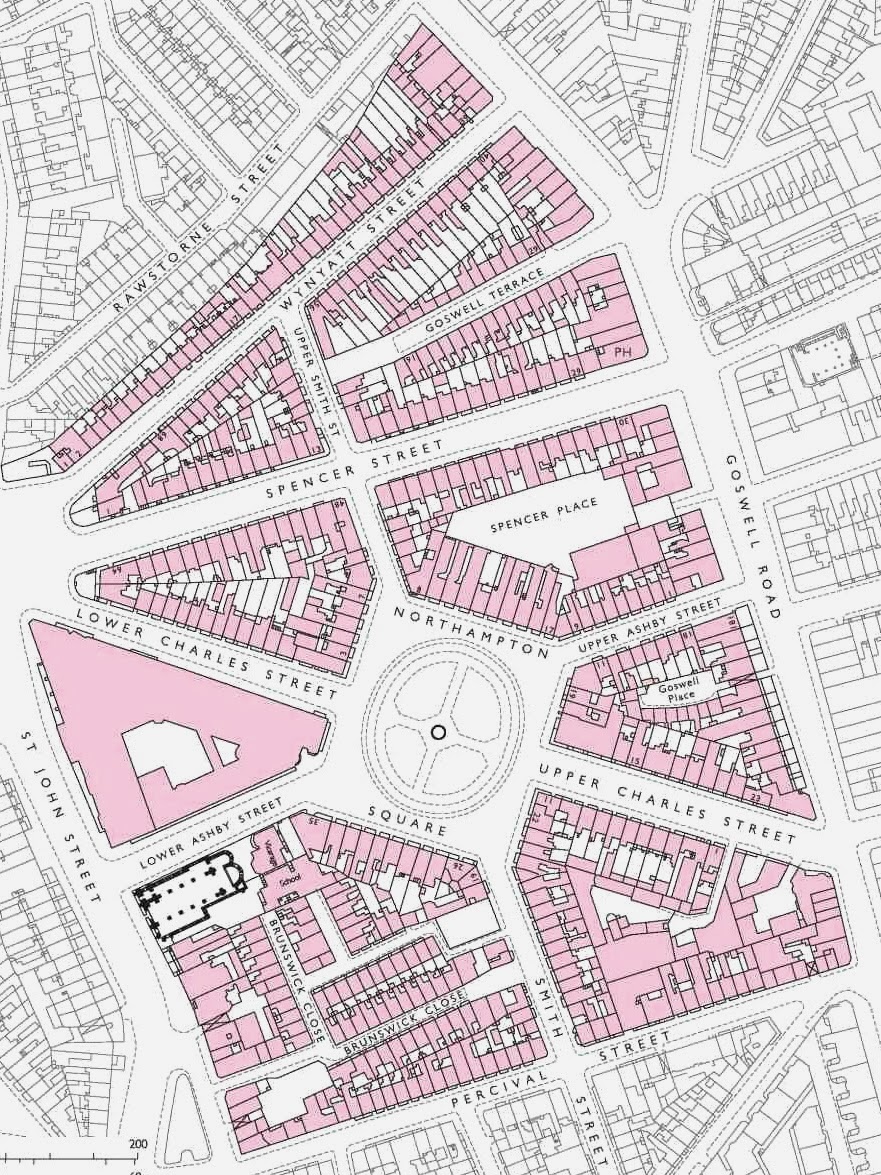 The Earlstoke Estate was built north of Northampton Square, in central London, near King's Cross station. The area had never been a desirable area to live in, even though in the 18th century there was a real Northampton Estate here. Before the war, London had started clearing some of the Victorian slums (the plan is from that era), but the war interrupted. Bombing damaged more of the area and the whole triangle between Spencer Street and Wynatt Street subsequently became the Earlstoke Estate, after the street that cut through the middle of the triangle. Read more about the history of this area of town here: www.british-history.ac.uk. 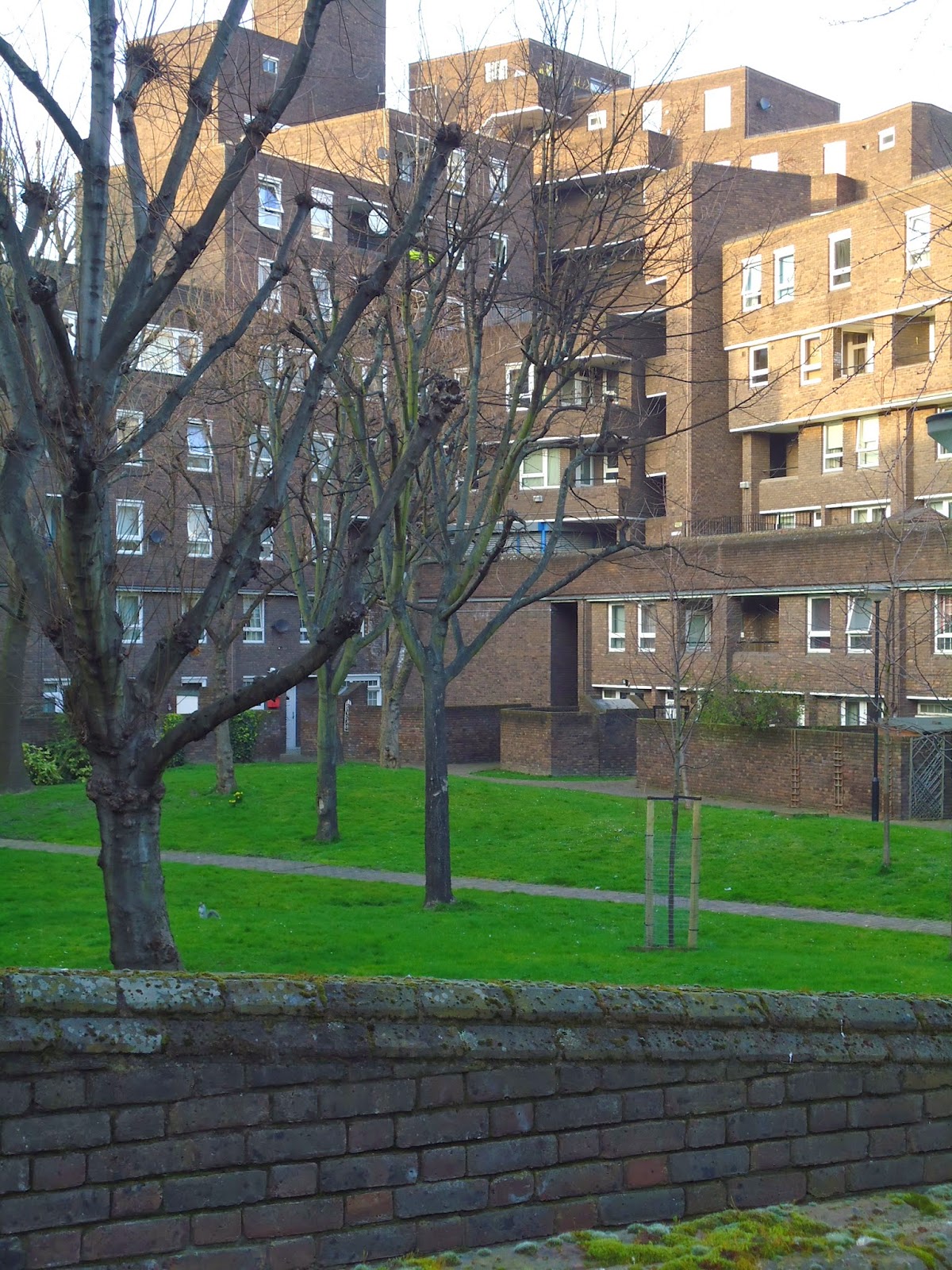 I think the simplicity of the seemingly randomly stacked boxes in the corner of the estate is beautiful.  On either side, rows of houses (in the sky, I suppose) lead to the rising corners. These photos were taken on a sunny day last week. I didn't correct the colours, my camera decided on the green of the grass... 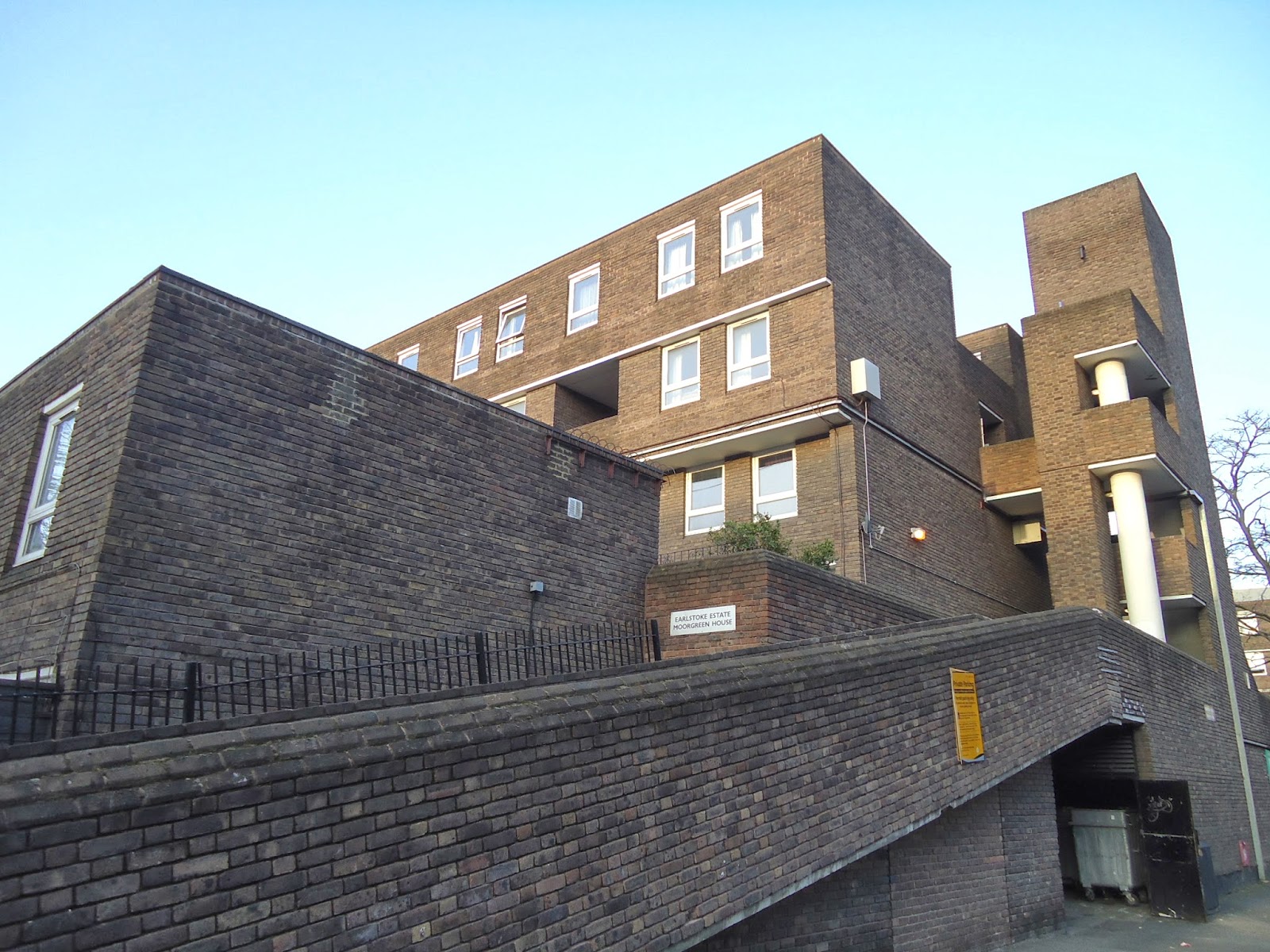 The ramparts to a 'street in the sky' have aligned brickwork. The white column in the stairwell is for rubbish. Like many houses in the UK, they are now blighted by upvc window frames, but it must be a great place to live in central London.
Posted by Rutger Hopster at 13:12