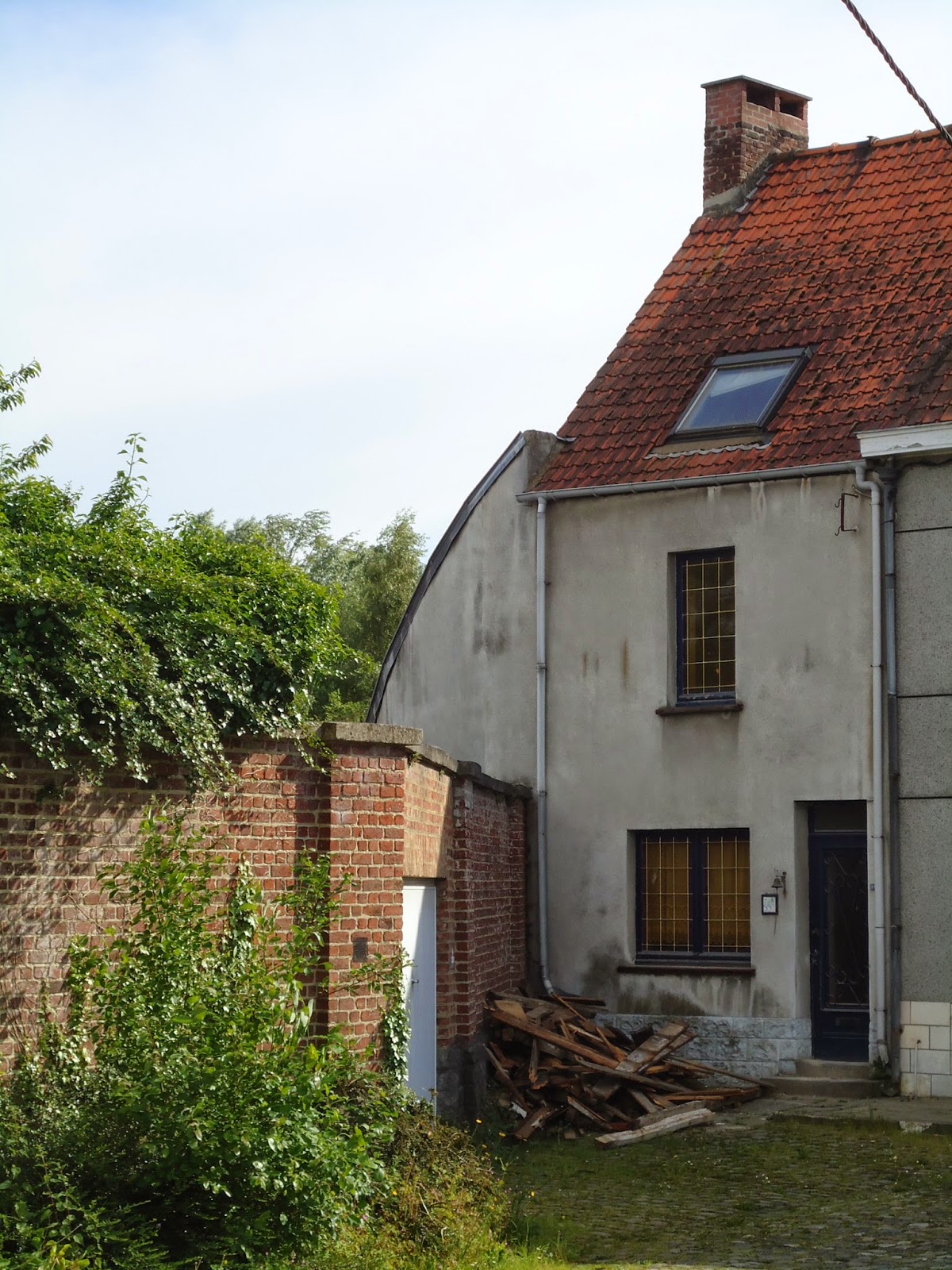 An end-of-row terraced workman's cottage, south of Brussels. Nothing special, I hear you say. A two-up two-down house in the countryside. But, have a look at the funny triangular shape next to it... 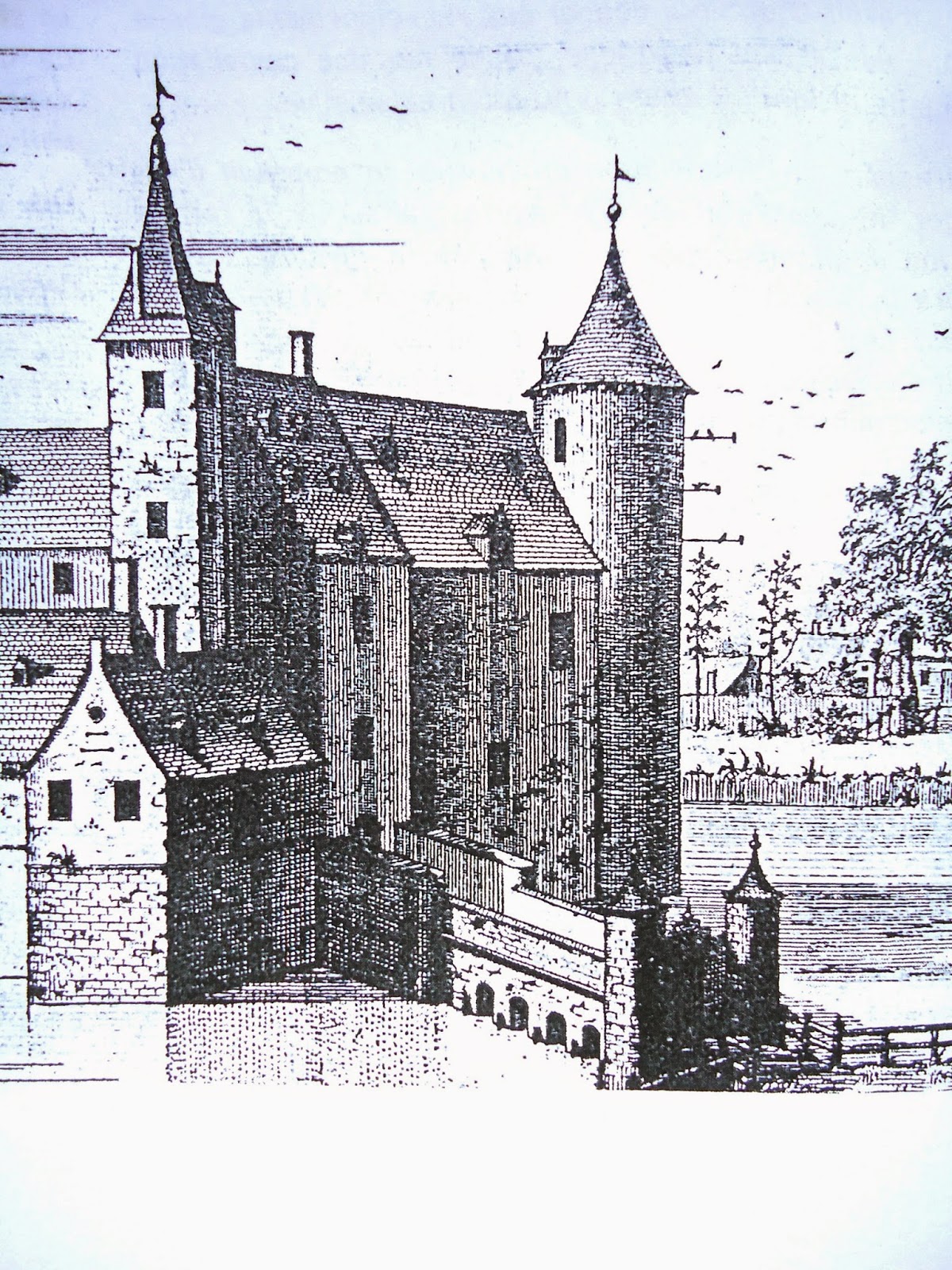 ... turns out that it is the remnant of a castle which once stood there! (Print by Harrewyn, Castella et praetoria nobilium Brabantiae, 1694.) And that remnant makes the house absolutely charming. 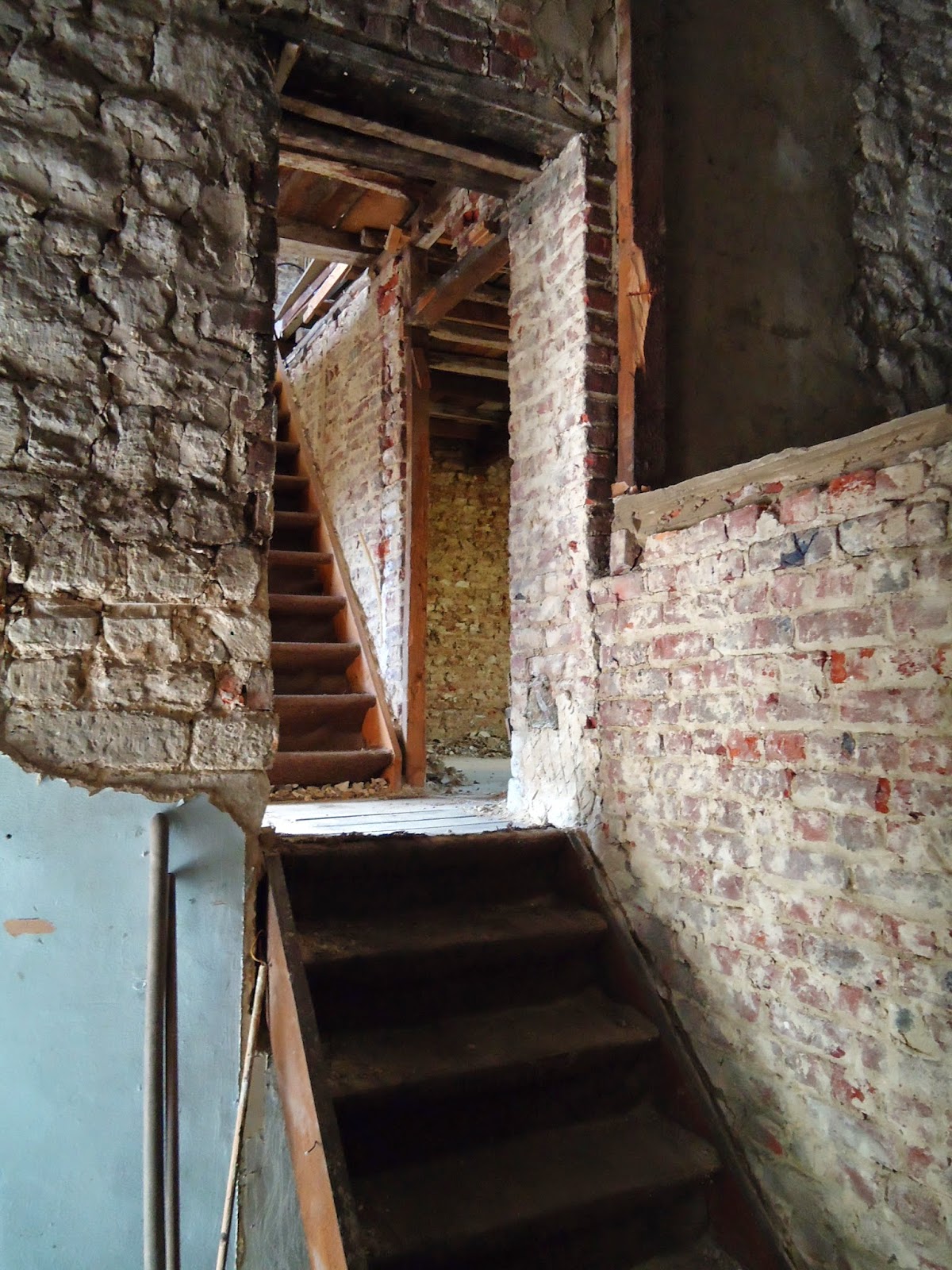 The small house was built in the 19th century, partly using the stone rubble of the ruin: see the wall to the left and far right. The stripped inside reveals several alterations over time. The interesting features of the house are the many levels, six in total (!) and the many small, irregular, rectangular window openings everywhere. Some of them are bricked up at the moment. 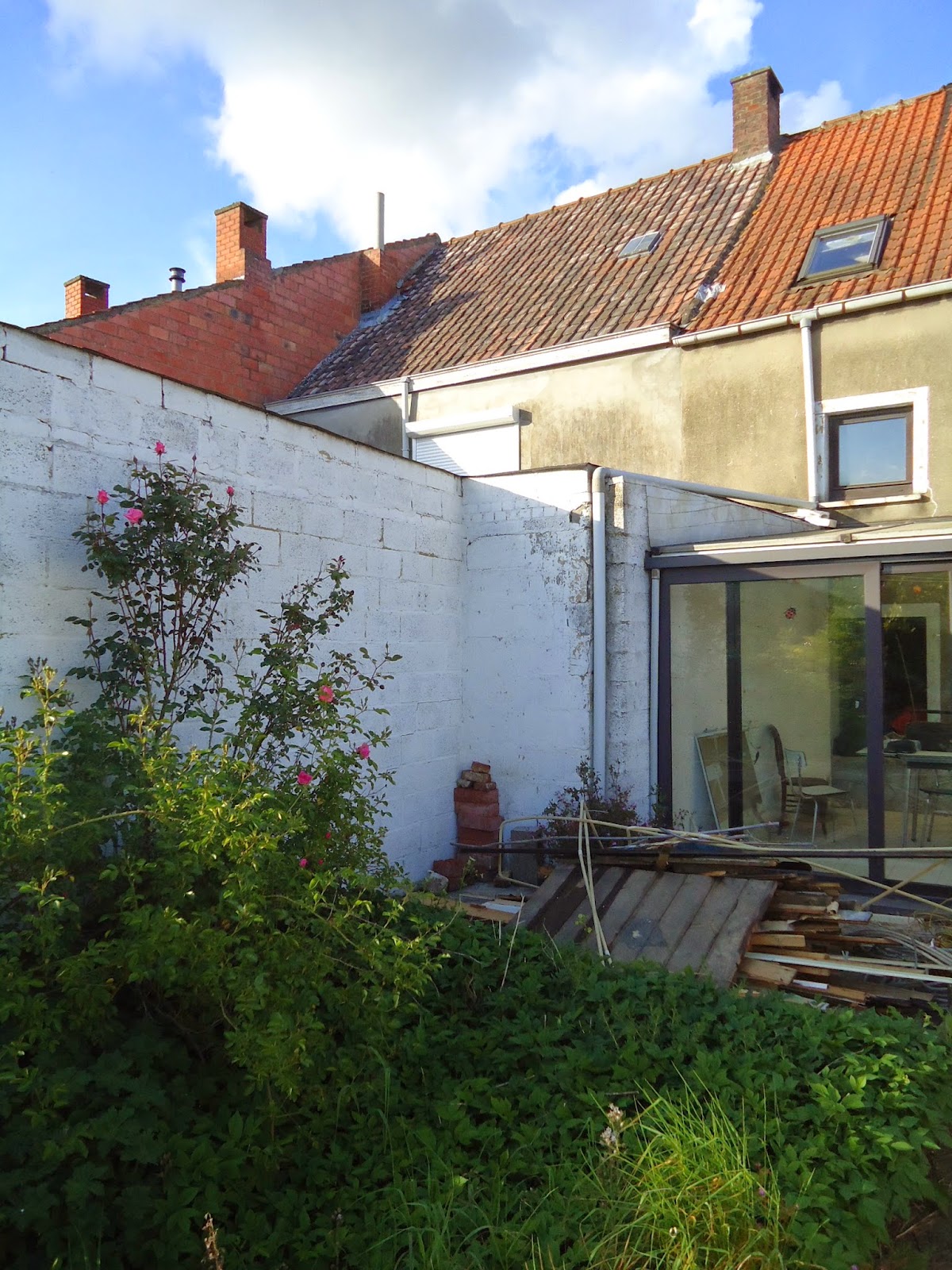 At the back the house is a typical Belgian 'koterie' with several outhouses and a 1980s extension which deprives most of the original ground floor rooms of direct daylight. 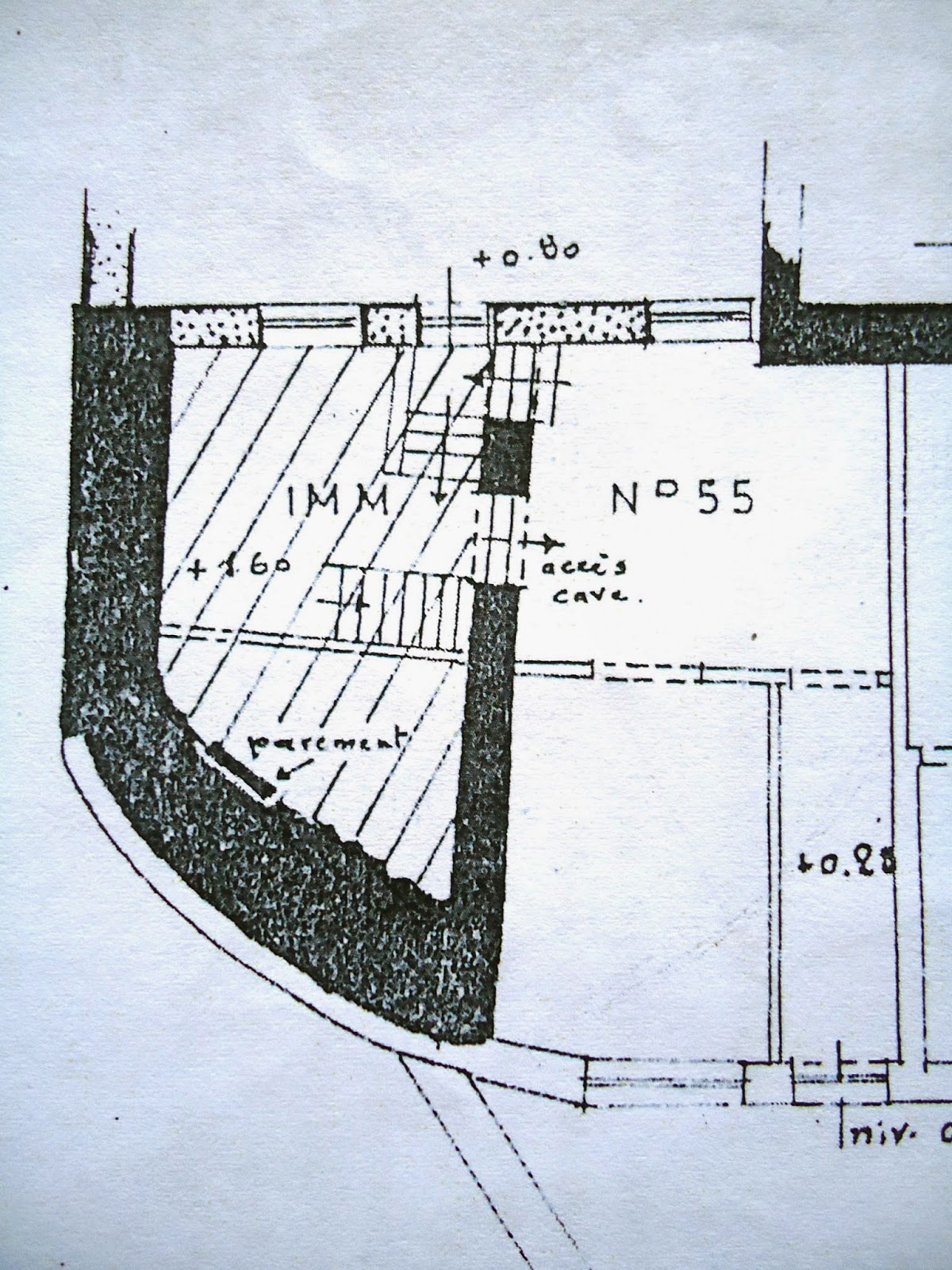 The triangular shape visible in the first photo is drawn in black here. The coloured-in walls are the remains of the castle and the triangle is thought to be one of the corner towers. In the photo above the white wall jutting out at the back is probably built on the foundations of another wall visible in the top right  hand corner of this plan. All very interesting! (Plan by Pays of 12 May 1978.) 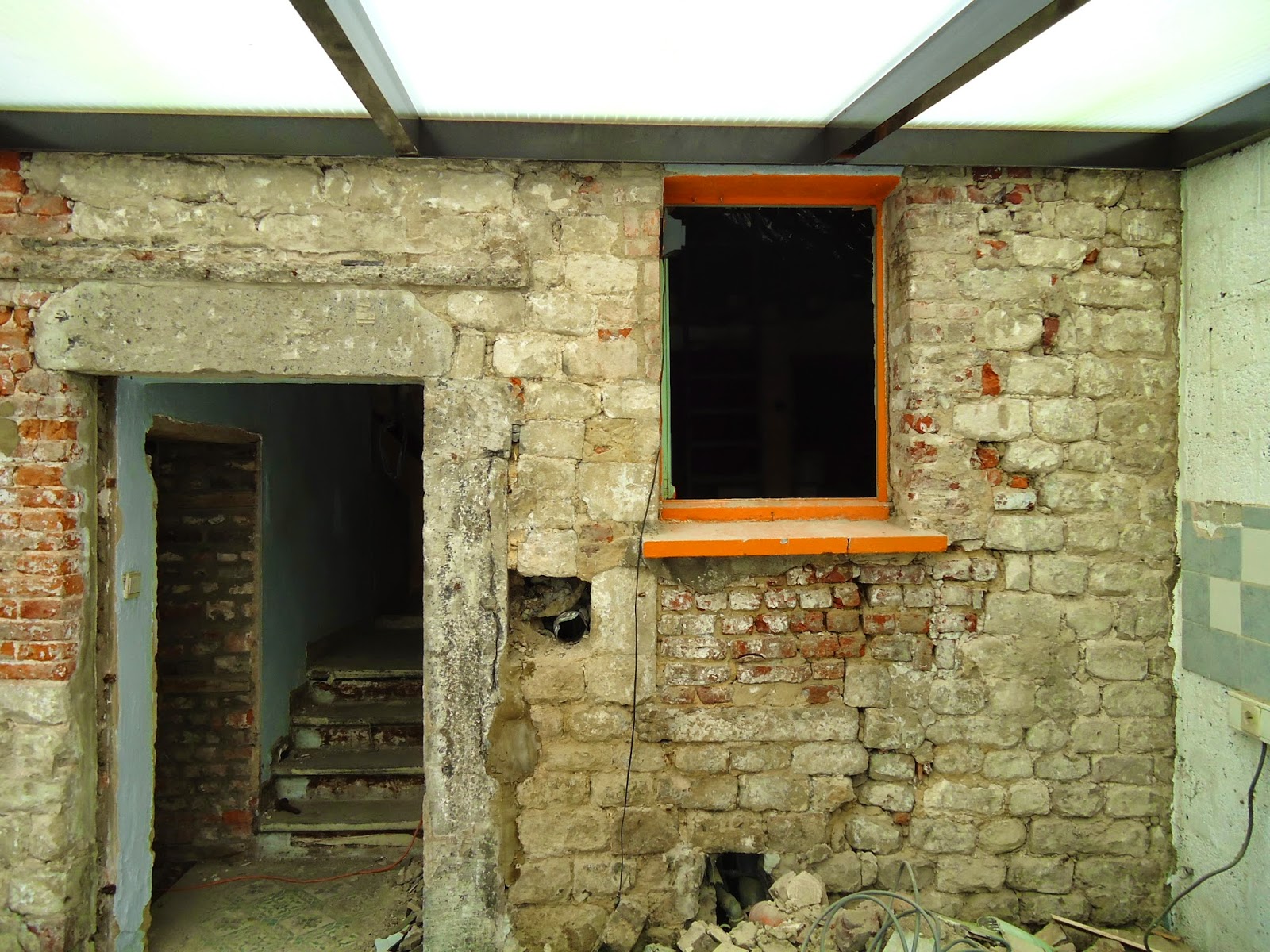 Old walls, openings and flights of stairs... The brown beams are part of the aluminium roof structure extension at the back. 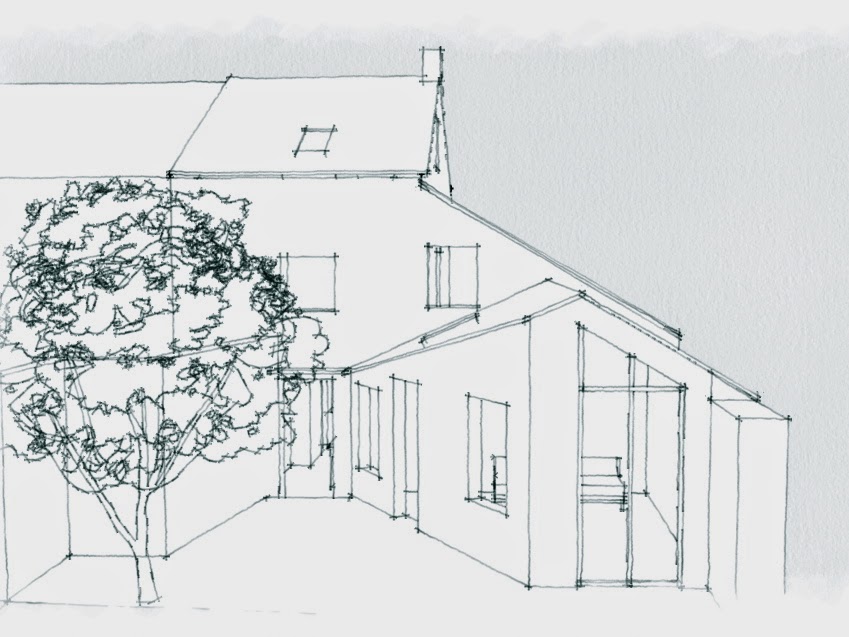 I was asked to help redesign the place to make it fit for the 21st century whilst retaining as much as possible the old structure of the house.

My proposal is three-pronged: i) to replace the rectangular extension with a triangular one that will allow direct light into the ground floor again; ii) to make use of all the window openings; and iii) to retain the lay-out of the inside of the old house.

The roof is designed in such a way that the presently bricked up window at the back can be opened up again. Windows in the new extension are in keeping with the windows in the rest of the house, except the one at the far end which is full height one, allowing an uninterrupted from the raised floor at the front of the house towards the garden at the back. 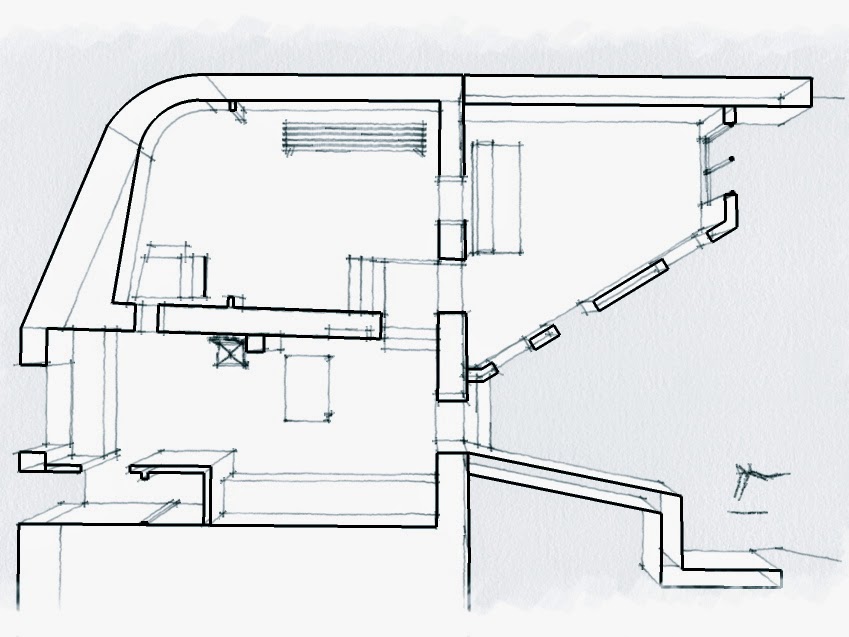 A section of the ground floor of the house. To the left is the existing front of the house, to the right is the new extension. The ground floor is on three levels with 60 cm difference between each level. It makes for an absolutely charming and unusual effect.

The ground floor rooms are each between 15 and 20 m2. Other levels in the house are a cellar and two bedroom floors.

This house is an absolute charmer!