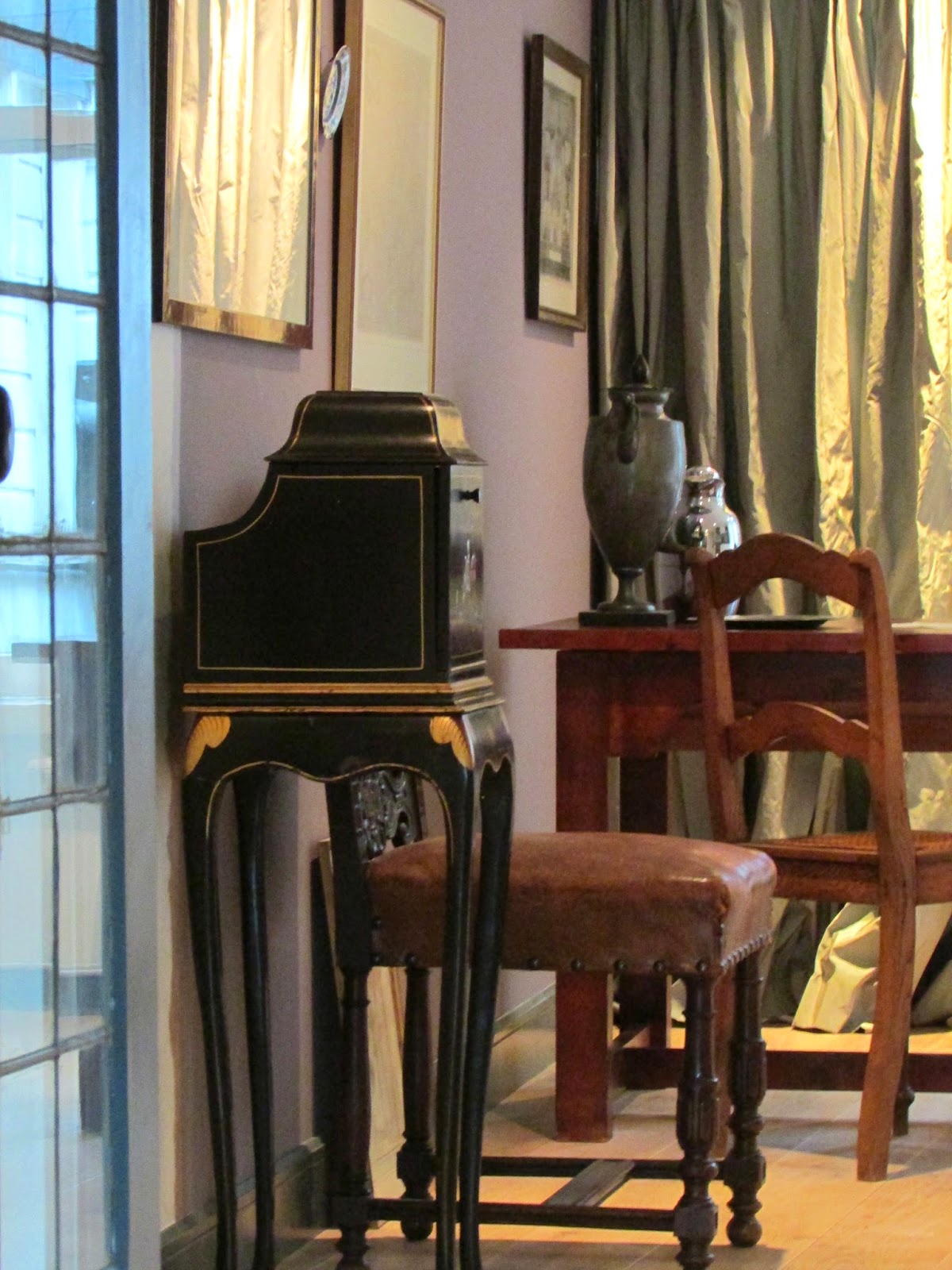 The Amsterdam canal-side project is completed! And it is a beauty!

From a plasterboard box with inappropriate laminate flooring for a house lived in by a pupil of Rembrandt, to a suite of small rooms in 17/18th-century style, delicate, unusual, in keeping with the view.

The client was away. Apart from clearing with her what she wanted, I had free reign (well, almost - an internet connection to cross-check, is never far away...). She now has her keys back and is delighted with the result. Mission accomplished.

What did we do? We took out the Ikea furniture, the wall-mounted flat screen television set and most of the recessed spot lights. We put in an oak floor, revealed 19th-century ceiling beams, we added old double doors, a window seat, oversized herbarium wallpaper and old Dutch colours and then went to an auction house and bought 19th and early 20th century mock Dutch Golden Age furniture and a few earlier scientific instruments and maps. And we added window drapes and cushions to complement the new, old look. 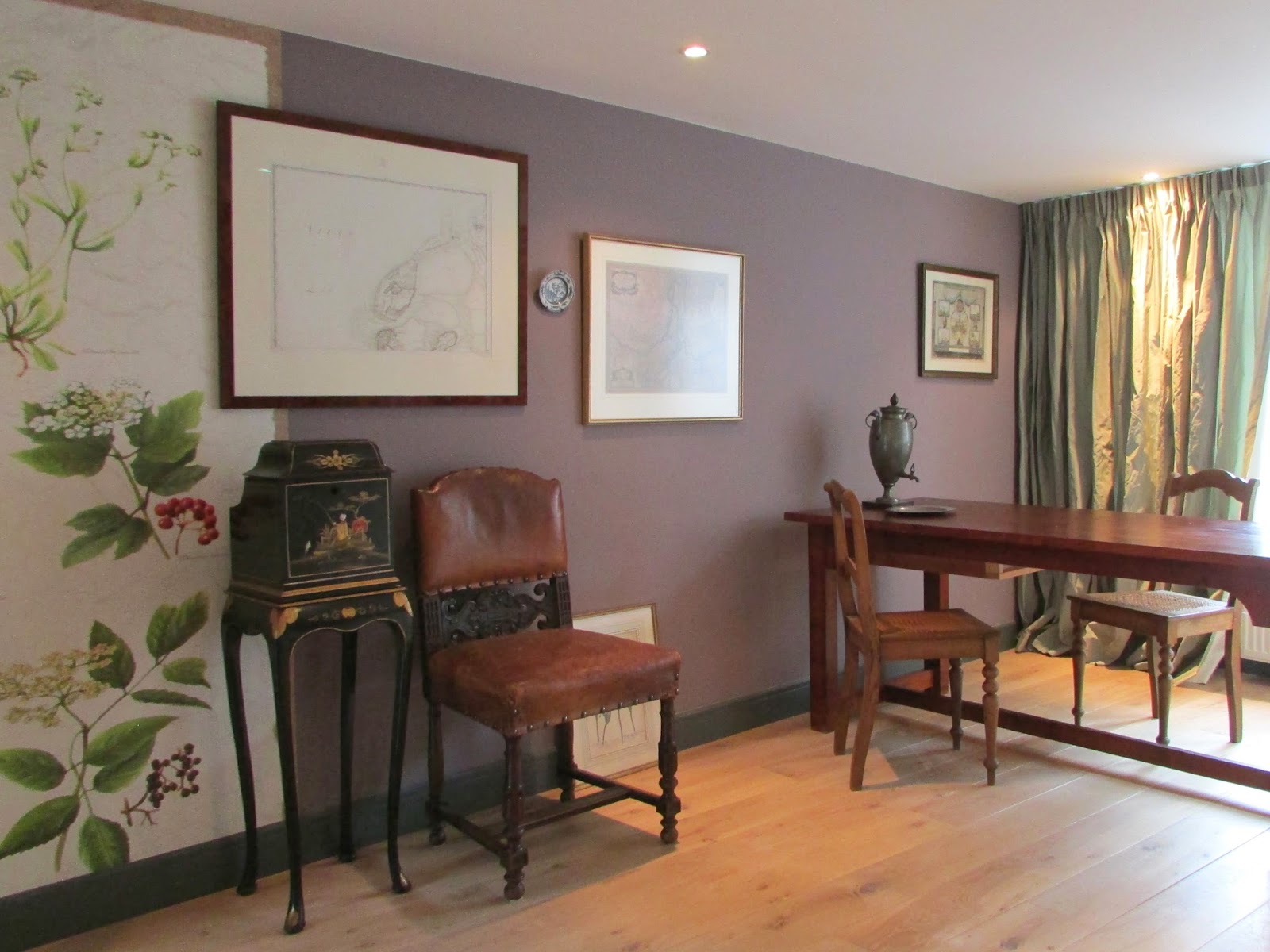 This small flat on two floors had been knocked through years ago, but the depth made the low ceiling even more oppressive. We split the space up again. Like it used to be.

At the back we had to keep the plasterboard ceiling (coming in at 2m20). There were simply too many pipes running above it. The colour scheme here is mauve and light green and brown. 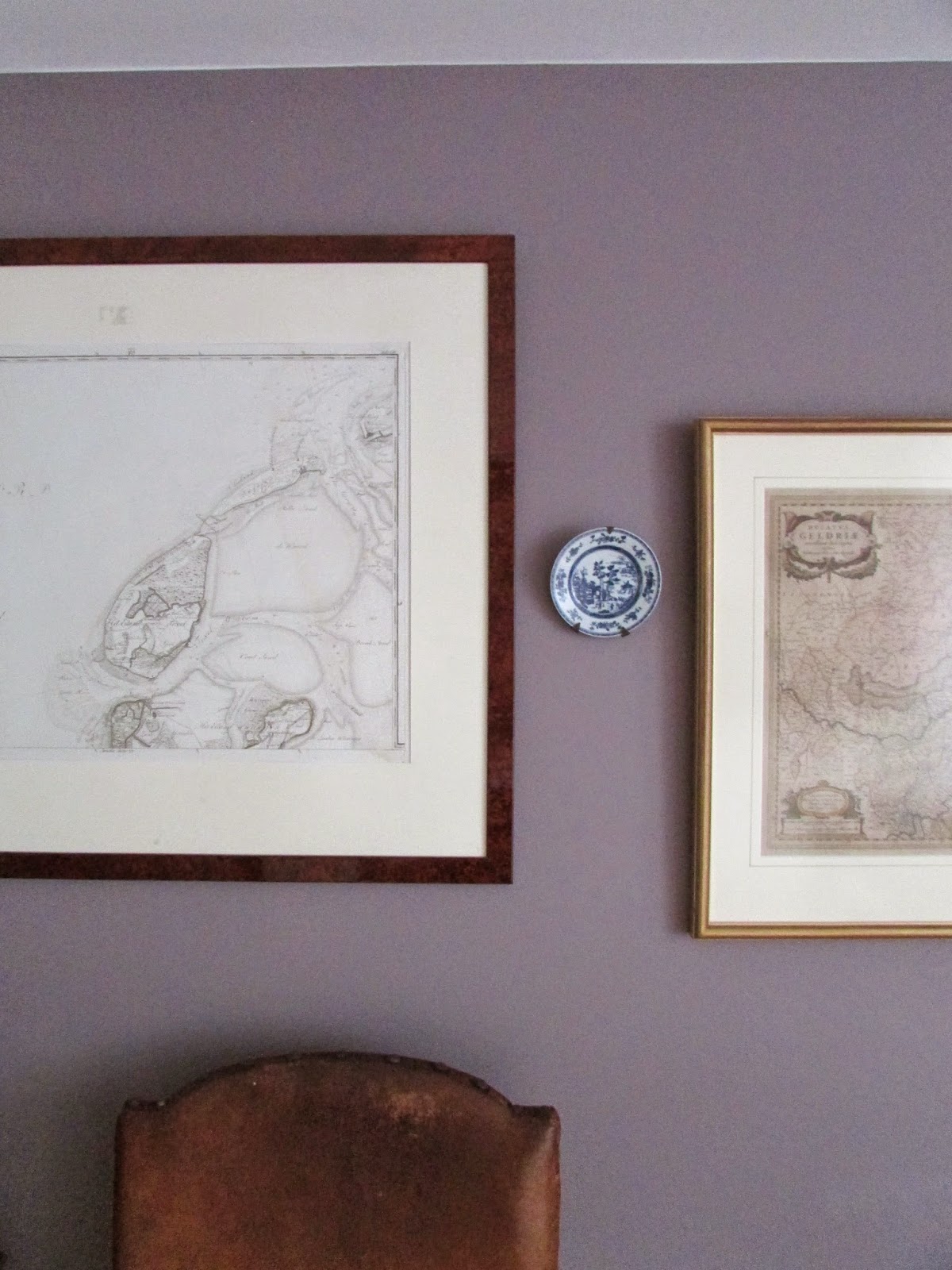 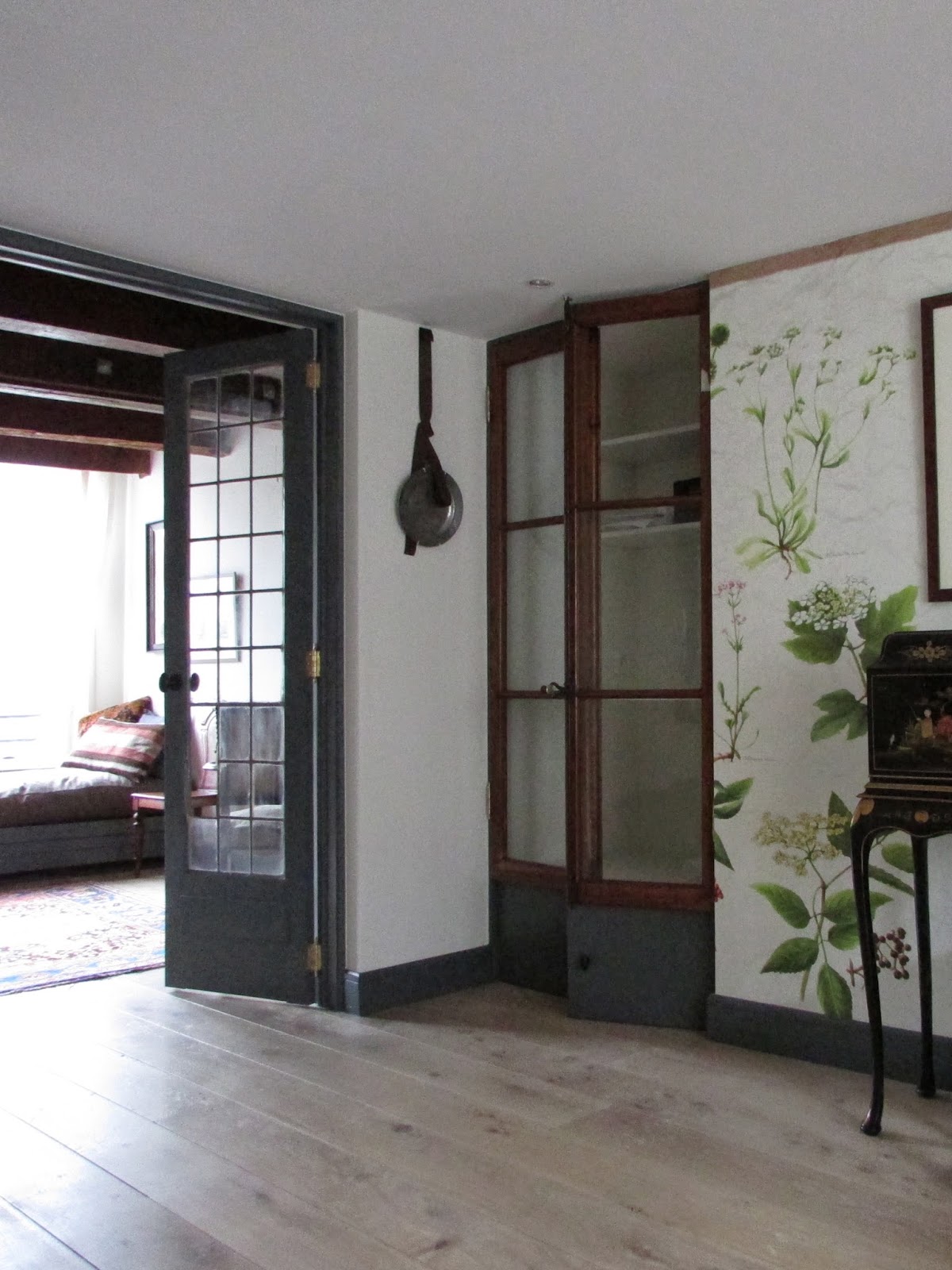 We added double doors to create a separate front room, in old Ducth an opkamer. The freed ceiling beams are visible here. The separation has a wardrobe on the left (not visible), a kitchen cupboard (with old doors as well) and a built-in bookcase on the front room side.

The chinoiserie box on legs is a drinks cabinet. Old tin plates hang from the ceiling on ribbons. The window seat is split in a lower and higher part, to break the view from the back of the flat. Partly visible to the left, is an 18th century barometer. Through the windows just visible, the imposing windows of the Old Church. Note that the stained glass doors have a few panes missing. It adds to the lived-in atmosphere. At the request of the client we added hand railings on the outside of the windows. All wood work was executed in lead grey. A few doors were painted Dutch red. 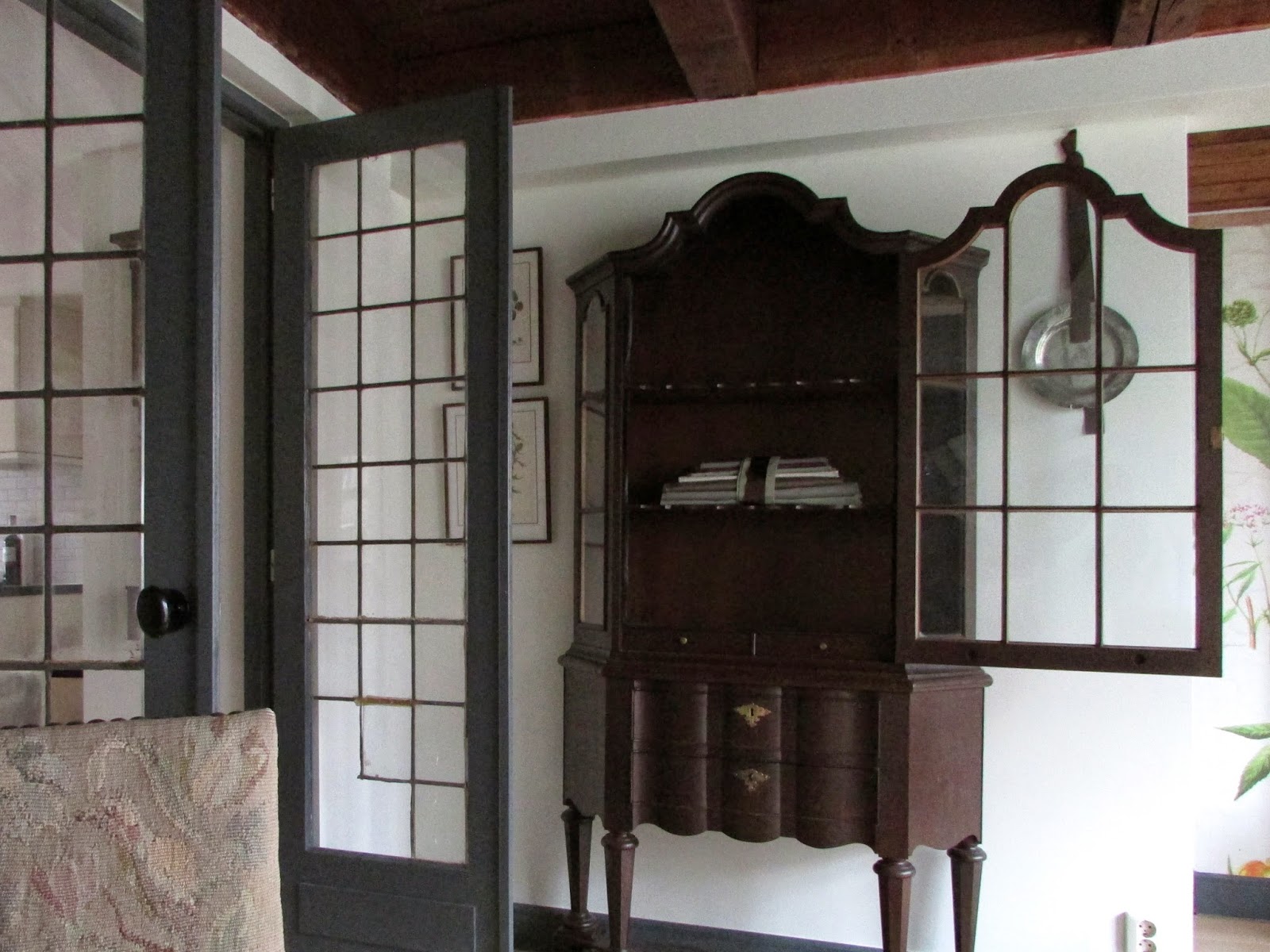 To the left of this picture, just visible through the stained glass door, is the creamy coloured kitchen that was kept. One day it will be painted to fit in better with the rest.

The Dutch-style cabinet was a challenge to find (like most furniture for here), it had to be miniature-size. This one is only 25 cm deep! 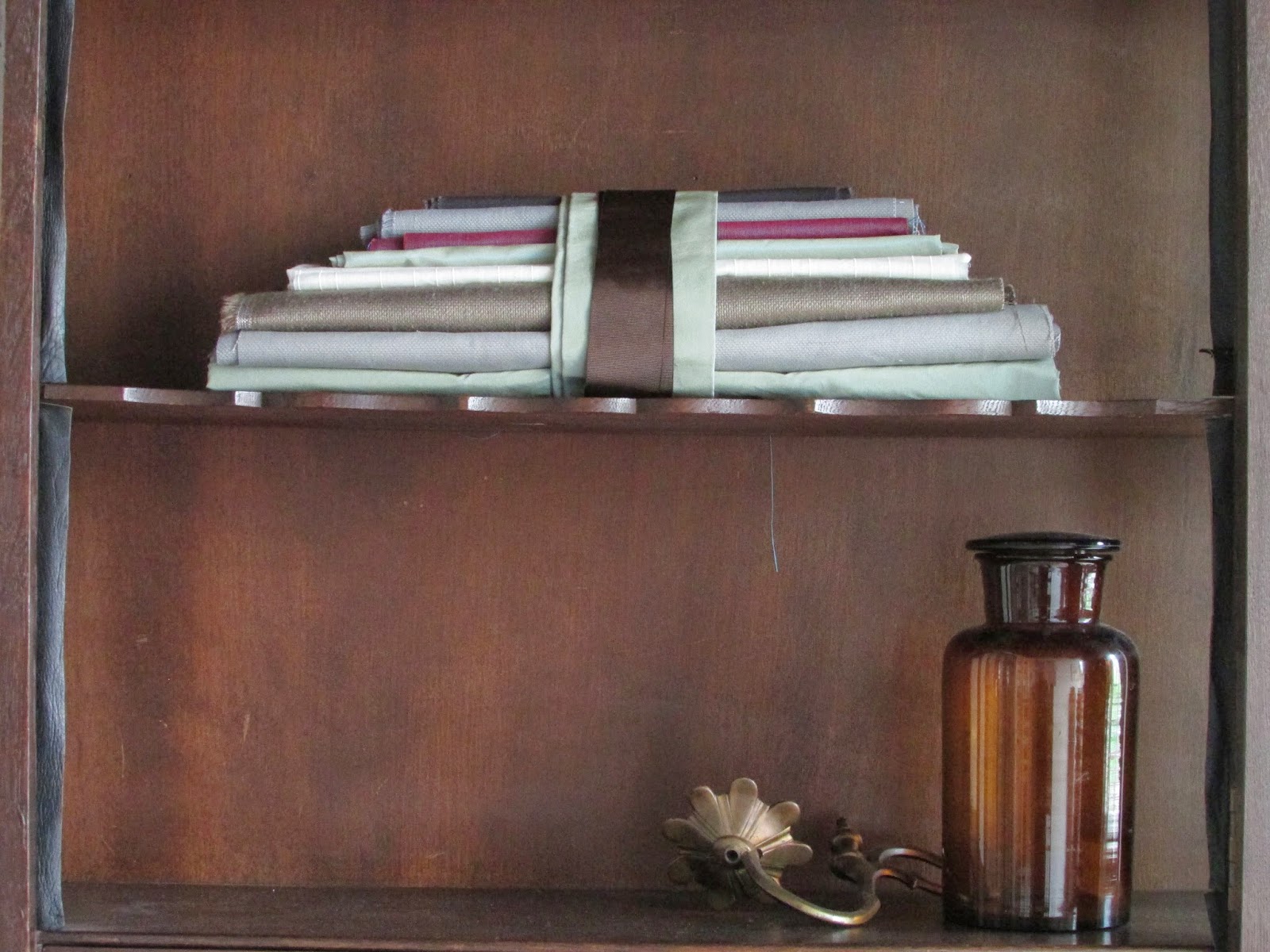 Left-over cuttings from curtains, lining and cushions. The hunt is on for Delft blue vases. 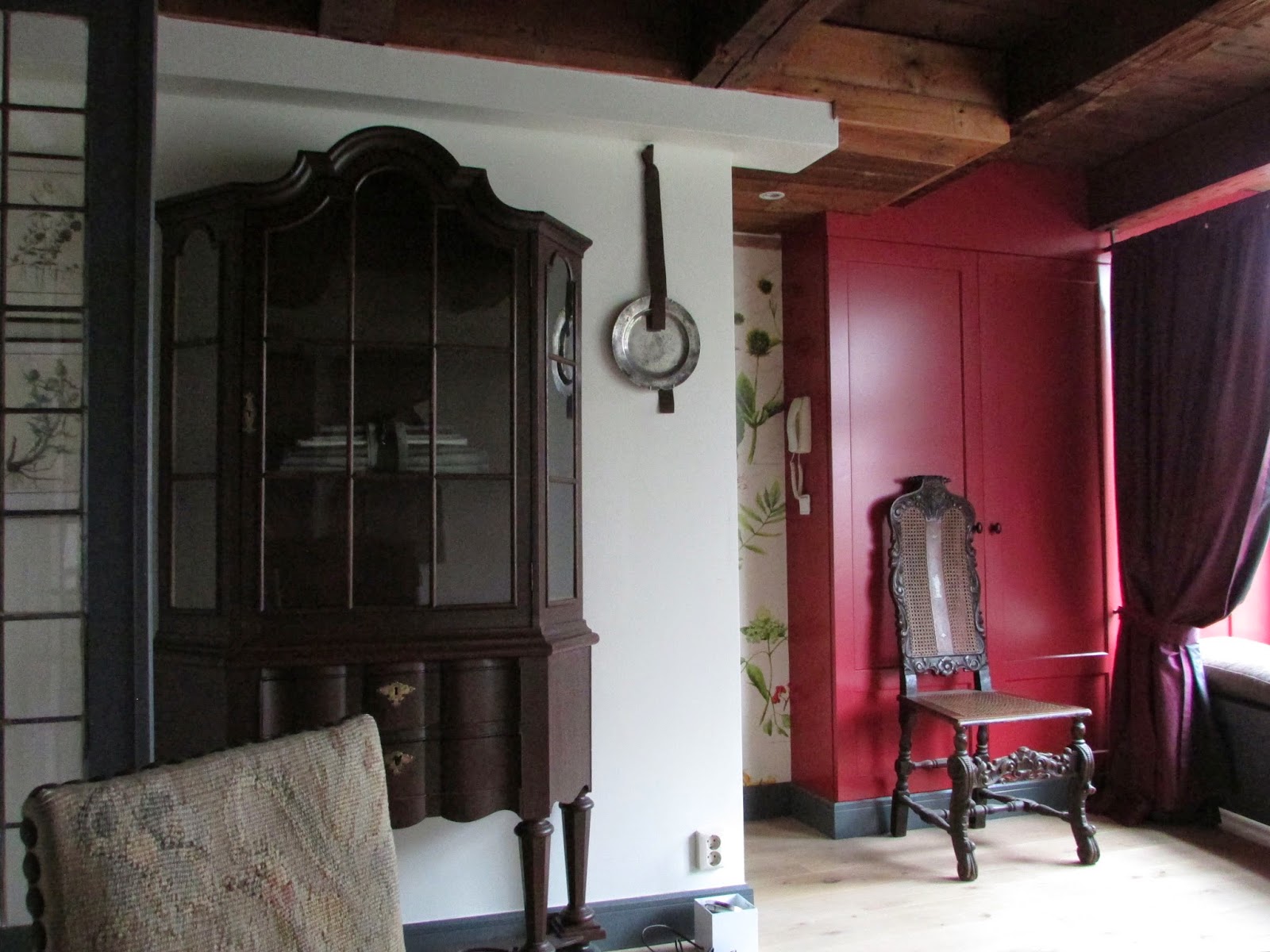 The red doors hide electricity meters. Behind the white wall is the staircase leading to the bedroom. Note the partially lowered ceiling. It hides the pipework that had to be re-routed when the plasterboard ceiling was taken out. 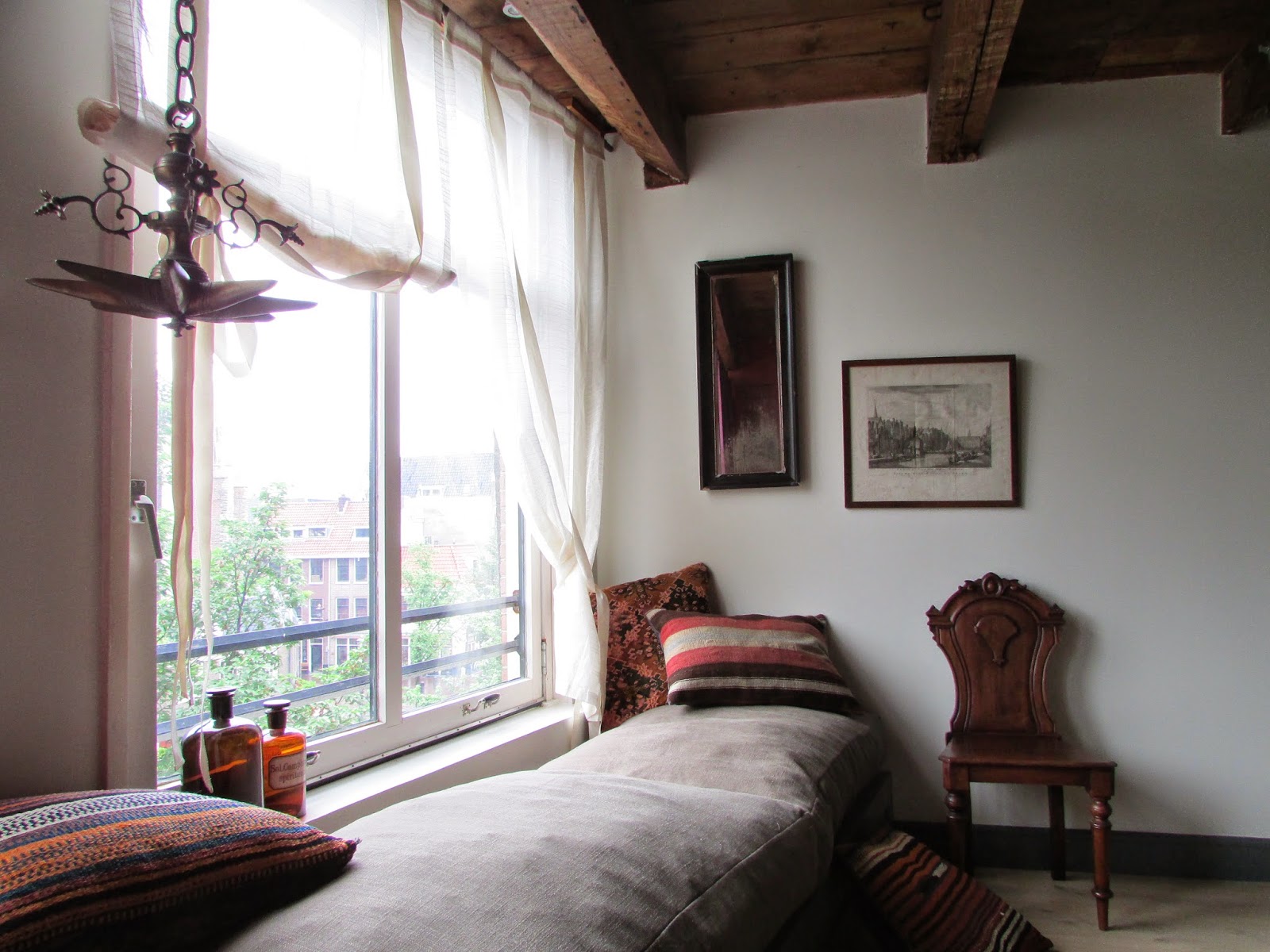 None of the windows have symmetrical dressings. The two windows to the canal have a heavy purple silk drape to one side (see photo above) and thin voiles to the left, rolled up and pushed aside with ribbons. Oil lamp, weathered mirror and stained print of Amsterdam all bought at auction.

The hall chair doubles as side-table. 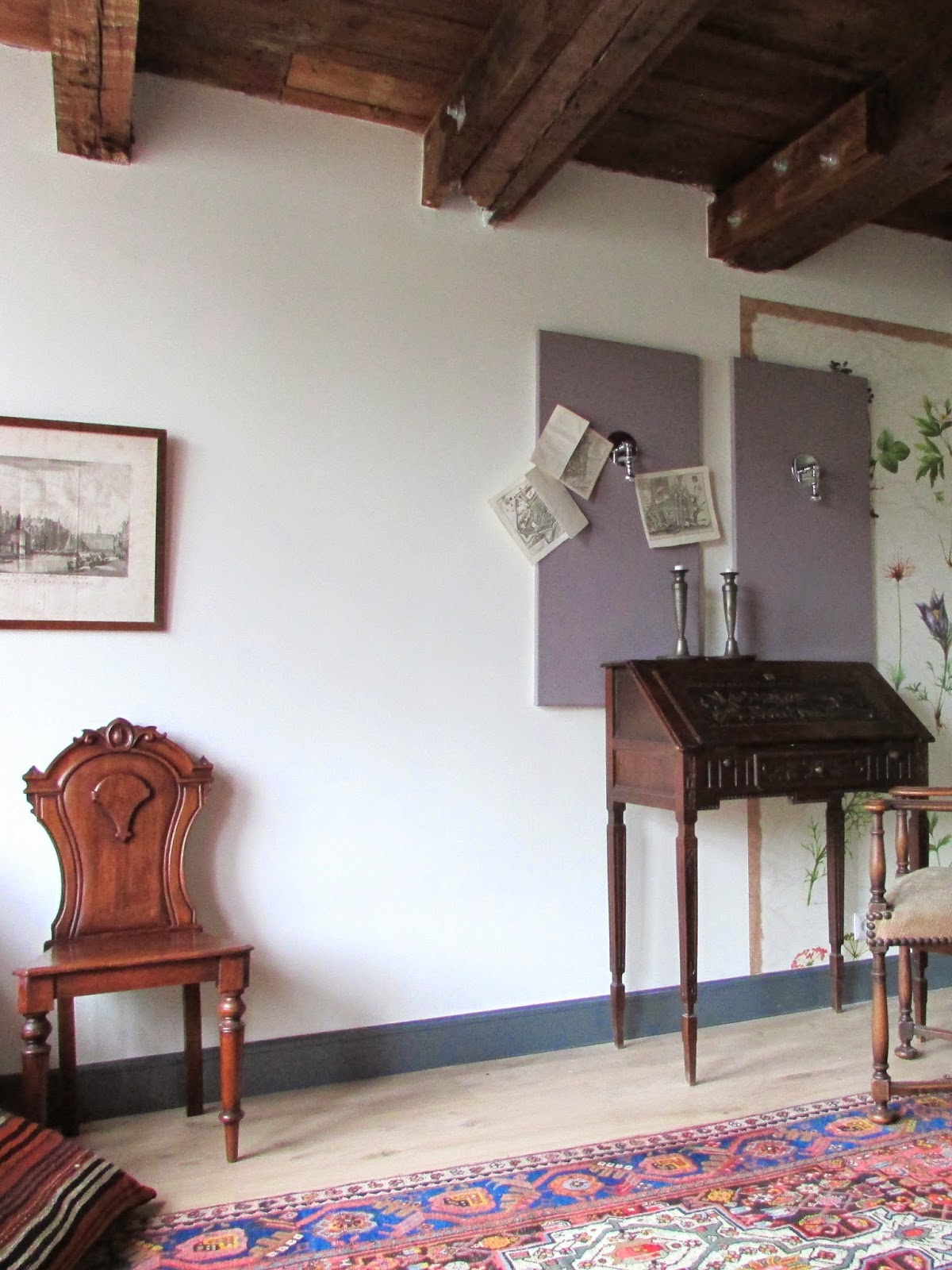 Integrating suitable lighting in this interior was a challenge. I decided to stick to modern but discrete fittings, like the two spot lights mounted onto canvases. They provide lighting for the writing desk. 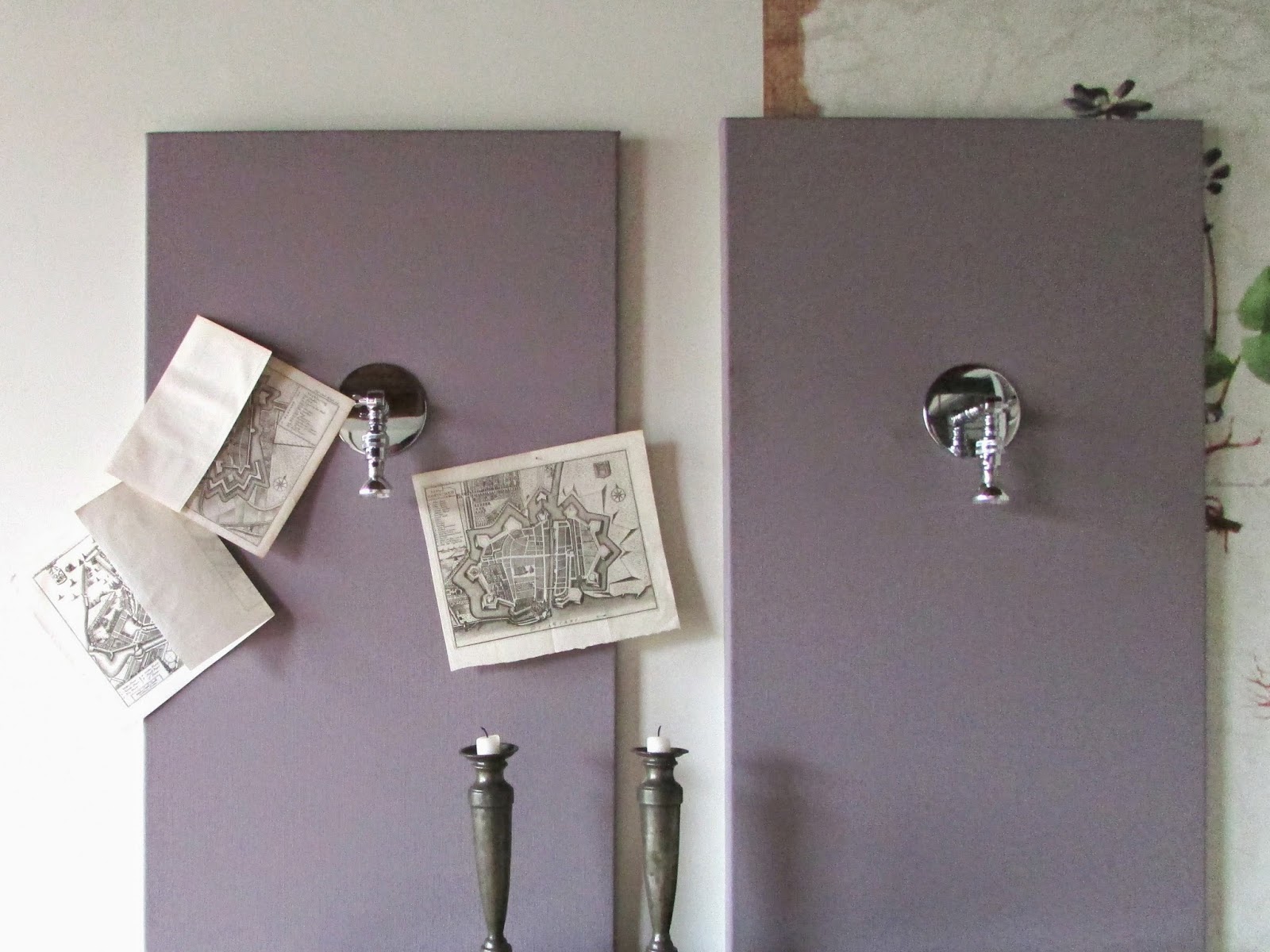 Old prints of Dutch cities are pinned to the canvases. To the right, the canvas partially hides the oversized herbarium wallpaper. The desk is late 19th century, but fits very well. This type of furniture is cheap to buy at the moment. 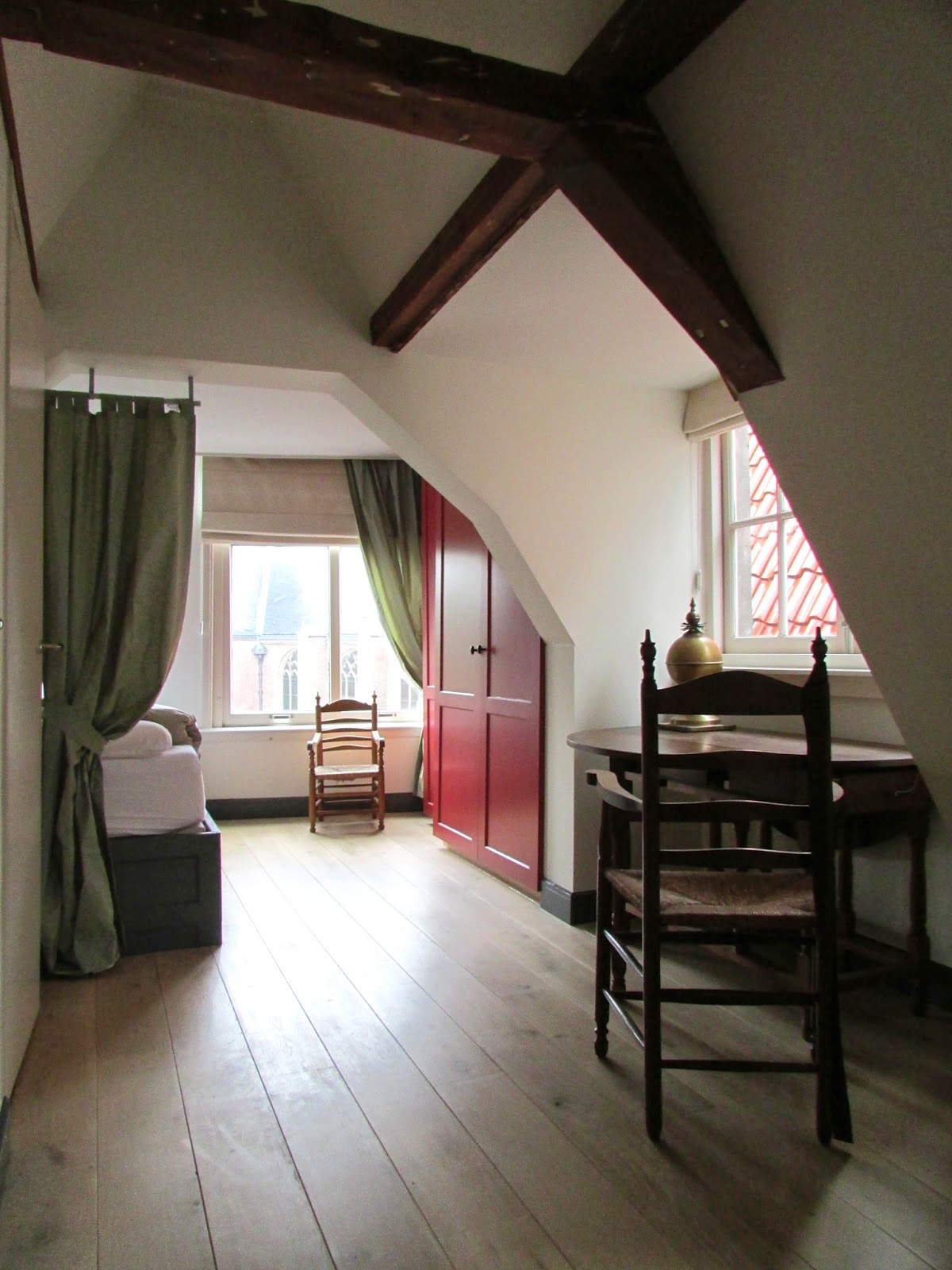 Upstairs I continued a restrained Dutch style with oak floorboards, Dutch red wardrobes and green taffeta drapes. The roof beans were white and were stripped back and stained. The bed is as if in an alcove to the left behind the drape. 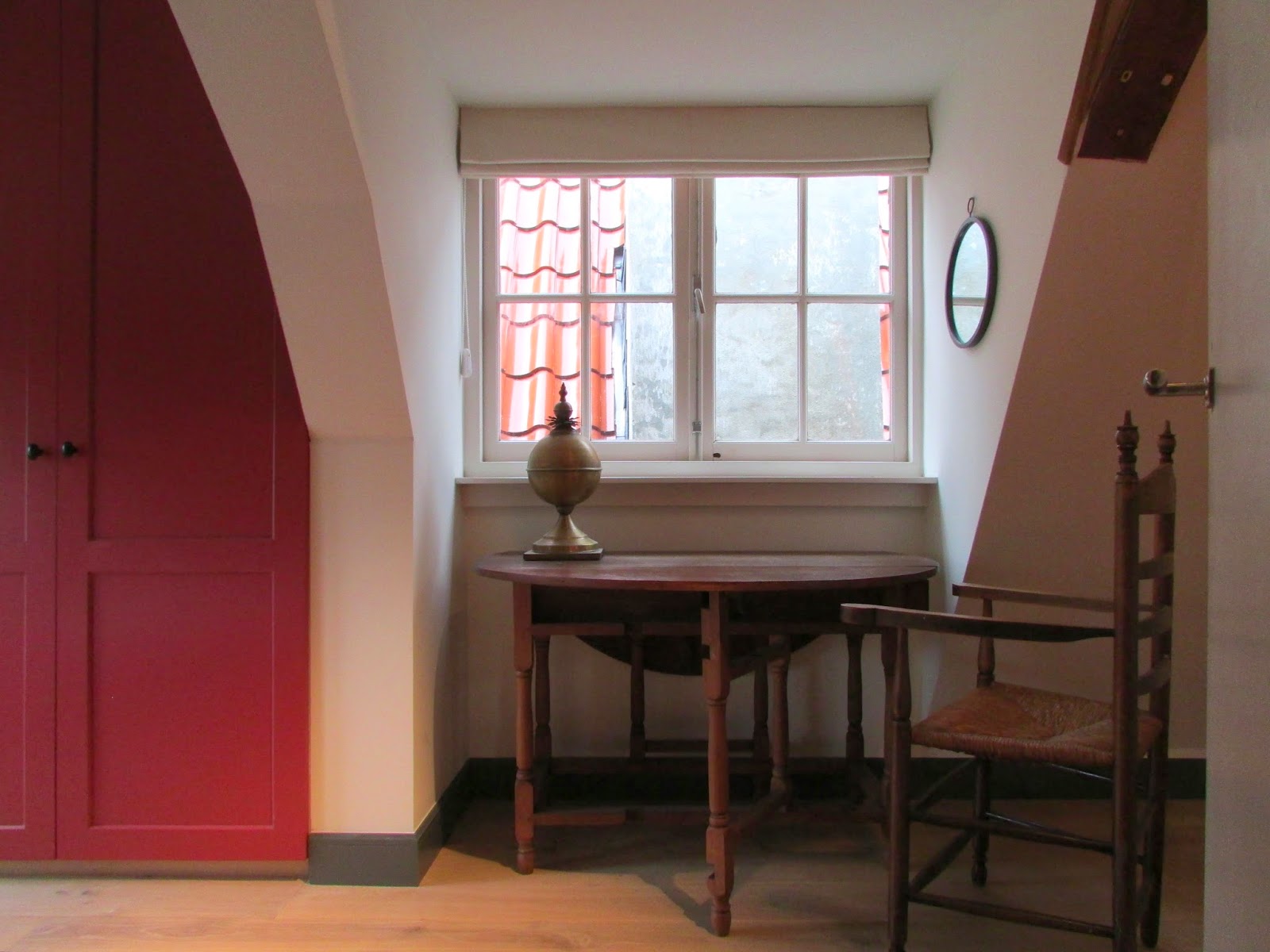 It can't be more Dutch than this, really. On the table a roof finial.

More on the trials and tribulations of this project, click here www.rutgerhopster.com and scroll down to see eight earlier entries on this project.
Posted by Rutger Hopster at 16:09